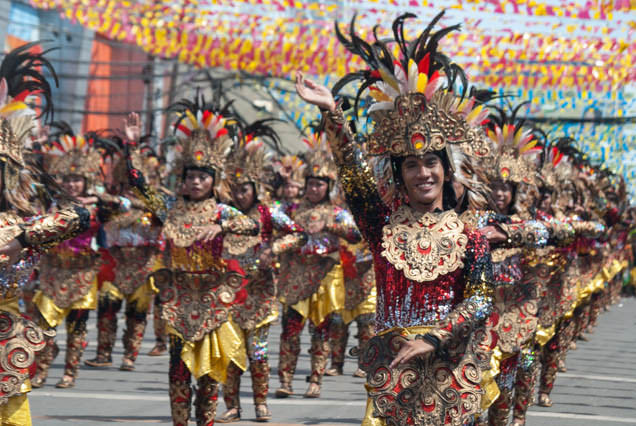 Though largely overshadowed by the Pope’s visit in Manila and Tacloban and having experienced overcast weather caused by tropical storm Amang, Cebu’s grandest festival – Sinulog, still beckoned an estimate of 2.5 million spectators, affirming how highly revered the celebration is for the Cebuanos. 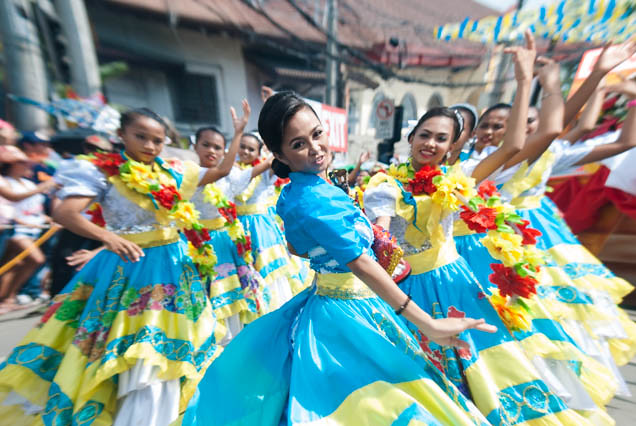 The dance ritual of Sinulog resembles the current of the river (sulog).

During the most-awaited street parade last Sunday, January 18, people gathered early on the 5-kilometer parade routes. Getting shoved and shoving other spectators were part of the festival experience. For almost seven hours, I perpetually chased the contingents – evading the policemen and crowd control staff to snap some photos since I was not sporting the hefty-prized photographer’s ID. 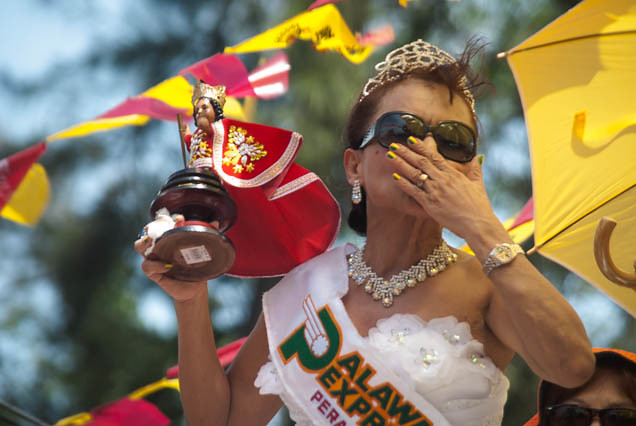 Mommy D, the crowd favorite during the street parade.

Sinulog is getting bigger and bigger each year, making it more commercialized; logos and names of the festival sponsors are dappled everywhere. “I thought it will be purely prayers and solemn processions since it is a religious celebration. But it is still worthy to experience especially for first timers,” shared our Malaysian friend Shamsul Bahrin Zainuzzaman of Gaya Travel, a top Malaysia-based lifestyle and travel magazine.  “I was pleasantly surprised with the flow of the festival; from the fluvial procession, to the street parade and finally to a night of drinking and revelry. Pinoys really know how to party!” Ed Junaidi added, another Malaysian friend who revisited Cebu to experience Sinulog for the first time. 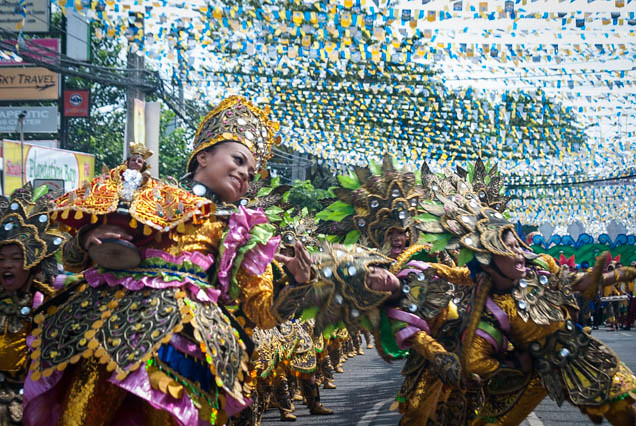 The dance ritual of Sinulog, said to resemble the current of the river (sulog), was already performed by the locals in honor of their wooden idols and anitos even prior to the arrival of the Spaniards, according to historians. But in 1521, Portuguese explorer Ferdinand Magellan landed in Cebu to plant the cross on its shore. He introduced Christianity and presented the image of the Santo Niño (Child Jesus) as a gift to Hara Amihan, wife of Cebu’s Rajah Humabon who was later named Queen Juana. She was reportedly ecstatic and started dancing while carrying the image in her arms. Other locals started following her in revelry. 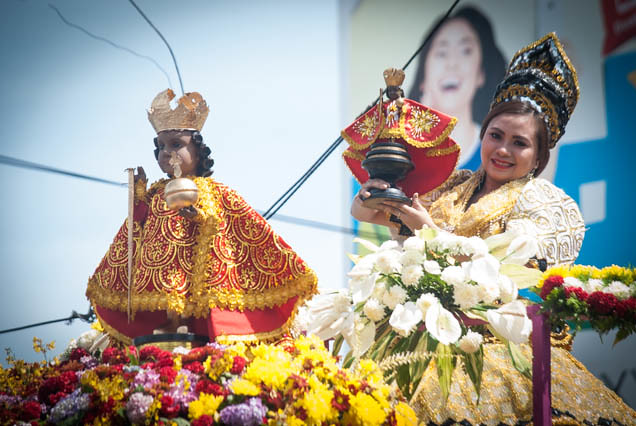 In 1521, Portuguese explorer Ferdinand Magellan landed in Cebu and presented the image of the Santo Niño as a gift to Hara Amihan, wife of Cebu’s Rajah Humabon.

For decades, Sinulog was just a small festival performed by candle vendors at the Basilica Minore del Santo Niño where the original image given to Queen Juana is enshrined. According to the official website of the Sinulog festival, “In 1980, however, David S. Odilao Jr., then Regional Director of the Ministry of Sports and Youth Development (MYSD), organized the first ever Sinulog parade. He invited the physical education teachers for a meeting to discuss the organization of a Sinulog street dance parade. Nang Titang Diola of Mabolo was invited to give a demonstration at the Cebu Doctor’s College. The steps were analyzed and further enhanced by steps used by the candle vendors who performed in front of the church– The Basilica del Sto. Niño.” 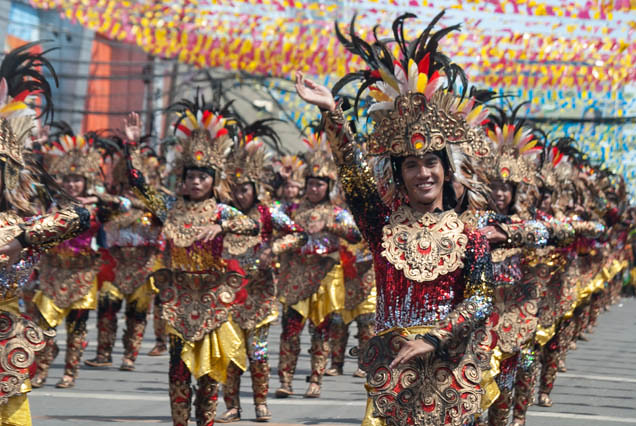 Street parades definitely spice up festivals, and if there was something poignant for me about this year’s highly coveted street revelry, it was watching contingents from storm-stricken towns perform. Leyte’s Buyogan Festival for example, joined Sinulog this year. The said tribe came from Abuyog, Leyte, which was heavily devastated by super typhoon Yolanda  back in 2013, reason why they missed the revelry last year. I remember chatting on Twitter with a travel blogger friend and a lead dancer for Buyogan Festival. He mentioned they were training for Sinulog as early as October simultaneously preparing for Maskara Festival. Gladly, their efforts have paid of; Buyogan Festival bagged three awards: first prize for the free interpretation, 4th prize for the Street Parade and Best in Musicality. 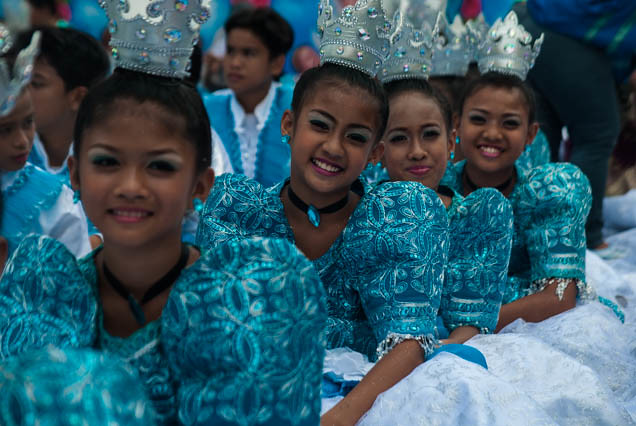 My personal favorite – the group that never failed to smile.

Many devotees see religious revelries as an opportunity for thanksgiving, but having observed the recent fests for days, it seems that it also help pull out the people from the insidious depressing mood caused by recent dim tragedies. They somehow serve as an inspiration to return the society to its previous state or construct a more satisfying way of life. Sinulog this year not only commemorates the Filipino’s pagan origin, praise the highly revered Santo Niño and the acceptance of Christianity, but it also avowed the resiliency of the Filipinos amid recent calamities that devastated the country. Unquestionably, it is the profound faith of the Cebuanos that’s keeping this celebration alive and contagious for decades.