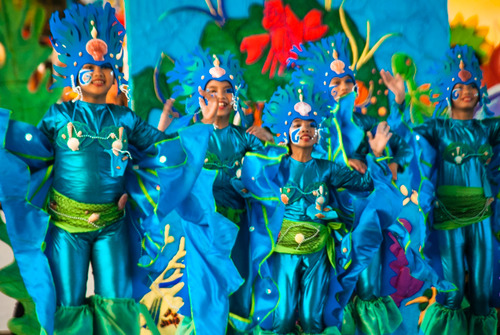 The bustling streets along Circuit Makati in Brgy.Carmona were filled with spectators last Sunday – February 22nd, as Makati celebrated the annual Caracol Festival.

Hundreds of students (of the city) from public elementaryand high school performed during the revelry.

“We practiced for 3 weeks. Our costumes were funded by the Makati
City Government,” Lorraine Speleski a student of San Isidro National
High School revealed.

Dazzling flowers and bees contingents are among the crowd favorites.

Caracol means “snail” in Spanish, which is seen as a symbol of
protection from the austerity of life. The city of Makati adapted this idea for the revelry that aims to educate the people to protect and preserve nature.  This is why participants are clad in shimmering flowers and plants, rainbow-hued sea creatures, insects, wild animals and even fairies.

Tribe number 4 which calls for the protection of the Philippine Eagle got the loudest cheer.

Unlike other age-old festivals in the Philippines, Caracol Festival is relatively new. Sometime in 1989, it was conceived as a Fiesta Island program of the Department of Tourism until it was officially made as the official city festival of Makati in January 1991.

Although their outfits and props are not as grand and their dance steps are not as polished as the bigger festivals in the country, I like attending smaller street revelries like Caracol Festival, as they are not too commercialized yet – no tons of large ads that overpower the real spirit of the celebration.

Even the Senior Citizens of Makati did not feel out of place.