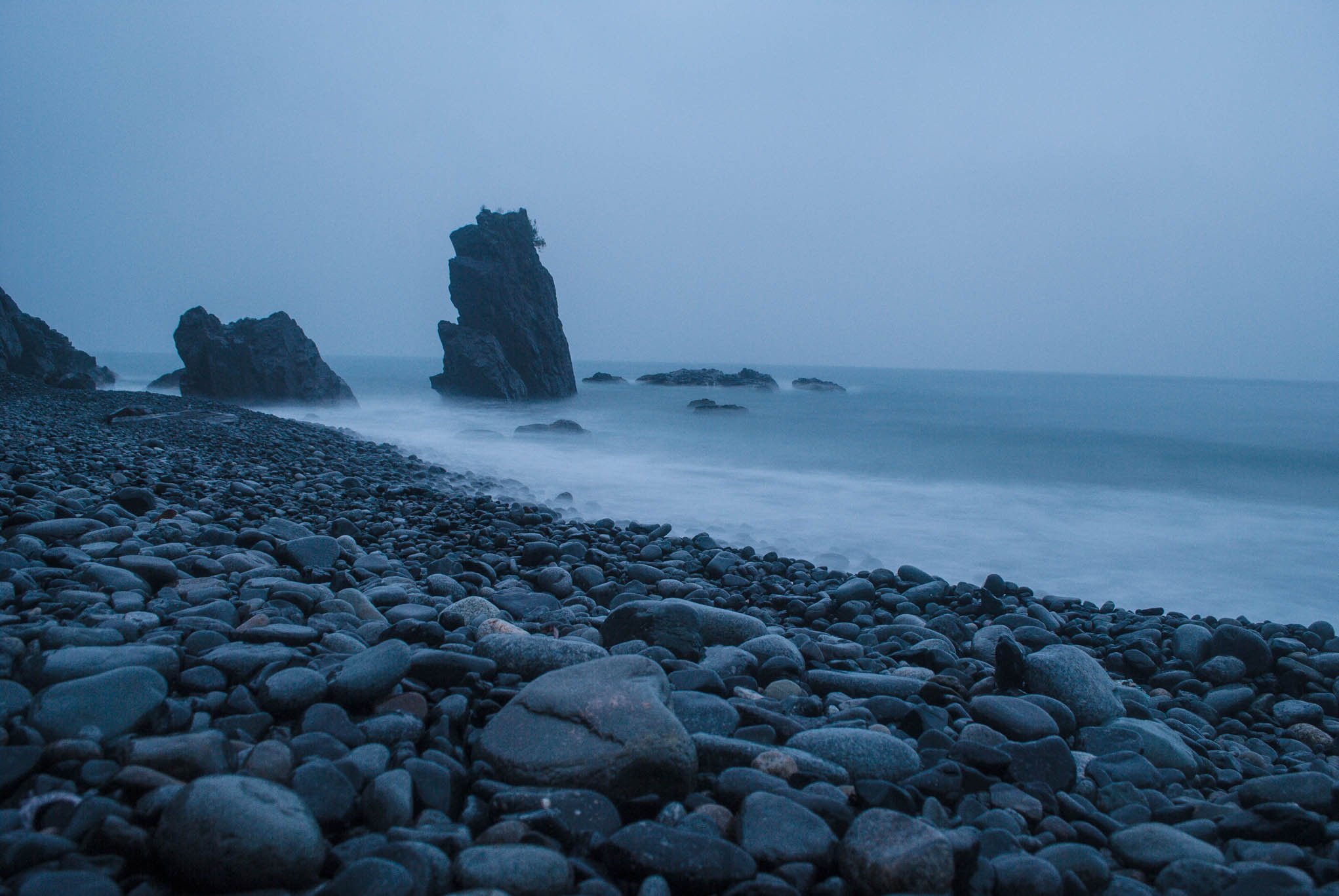 Pebble beach is a beach peppered with small to medium-sized pebbles.  The formation of pebble beaches is still a big question to date.  While generally it is assumed that the glacial era left plenty of stones and sand on the ocean floor and because of beach-drift they were pushed onshore, a comprehensive research needs to be carried out for each beach to better understand the science behind the pebble beach formation.

Emery, K. O.m  in the journal Grain Size of Marine Beach Gravel explained that “on a beach, shingle tends to be moved to the top of the beach, where it occurs mixed with sand, forming a steep that bank near the high water level. A typical shingle beach has a ridge at the level of the level of the extreme storm wave action and minor ridges at lower elevations marking the levels of lesser storms or lower tides. “

PEBBLE BEACHES IN THE PHILIPPINES 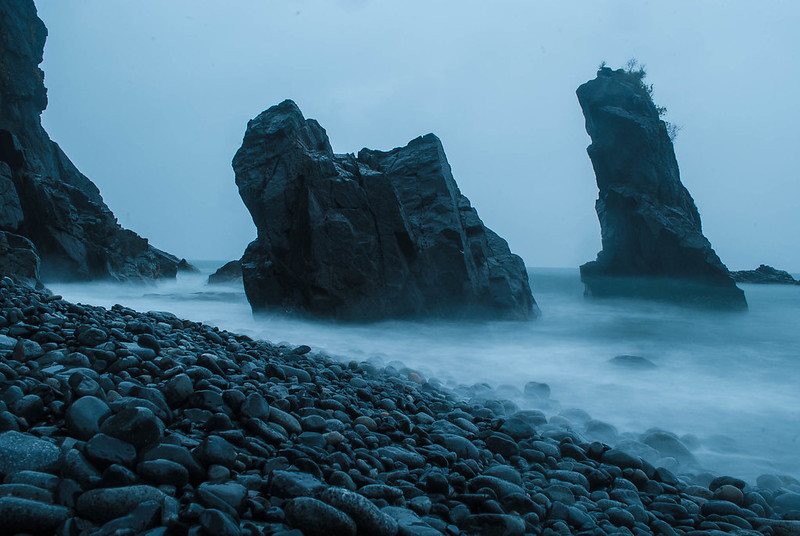 Located in the town of Dipaculao, Aurora, Ampere Beach is a popular side trip when touring Baler. This jaw-dropping beach hemmed in by polished pebbles is a popular spot for catching the sunrise and photographers especially love this beach for long exposures.

How to get to Ampere Beach

From Baler town proper, you can charter a tricycle to take you to Ampere Beach. 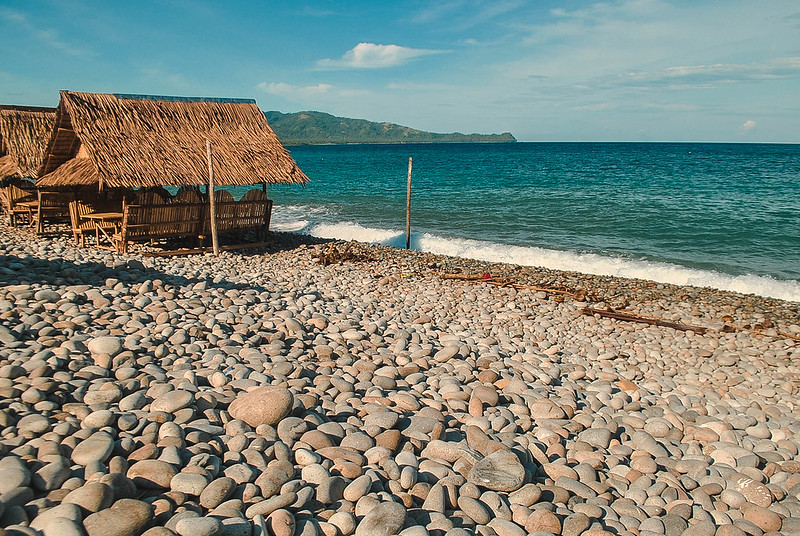 Tucked outside the outskirt of Surigao City is a long stretch of pebble beach called Mabua Pebble Beach.  Whenever I visit Surigao City,  I can’t help but visit this beach.  My friend Nathalie, who lives in Mabua informed me about this.  Interestingly, as you go farther, the pebbles dappled on the shores get bigger.  Mabua Pebble Beach is lapped by mad waves during rainy season that makes it more dramatic.  This beach is also a good spot to catch the beautiful Surigao sunset.

While you are at it, trek the paved mountain stairs near the resort that connects Mabua to Looc, another village on the other side.  At the summit, you will be rewarded with a scenic view of Mabua Beach and Looc Beach.  You can hike down to the next cove where Looc Pebble Beach is located.  It is also dappled with pebbles, only smaller and lesser, and the atmosphere here is more rustic compared to the more popular Mabua Beach, it seems more like a shingle beach. I guess the difference of the pebbles found in Mabua (with more abundant ad bigger stones) and Looc is an example of what J.A. Steers of Department of Geography, Cambridge discussed in the journal How Are Beaches Supplied with Shingle that “some shingle beaches are contained between two rocky headlands, and if the beach material is the same as that of the enclosing rocks, and of those in the immediate neighborhood, it is taken for granted that the wear and tear of these rocks have produced the shingle. If the dominant waves approach such a bay rather obliquely the shingle is usually more abundant to one side.” 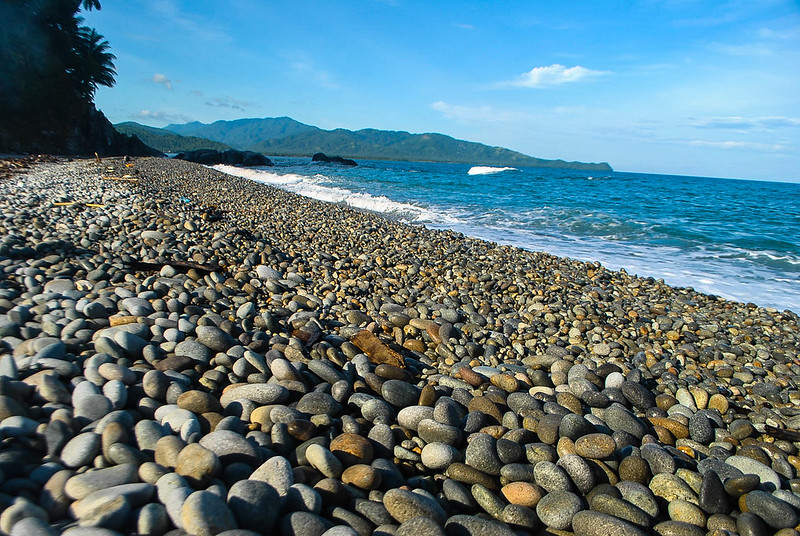 How to get to Mabua Pebble Beach

The best way to get here is to charter a tricycle. Travel time is about 20 minutes, and fare is about PHP 150 / USD 3, good for 4-5 persons, one way.  Alternatively, if you want to commute, you can ride a multi-cab bound for Mabua, and then hire a motorcycle to Mabua Beach for roughly PHP 50 / USD 1 per person.

While the main attraction in Lobo, Batangas is the Spanish-era Malabrigo Lighthouse (Faro de Punta de Malabrigo), Malabrigo Point is gaining attention for its pebble beach. Most of the pebbles prinkled here are small to fist-sized, grey and white polished stones. 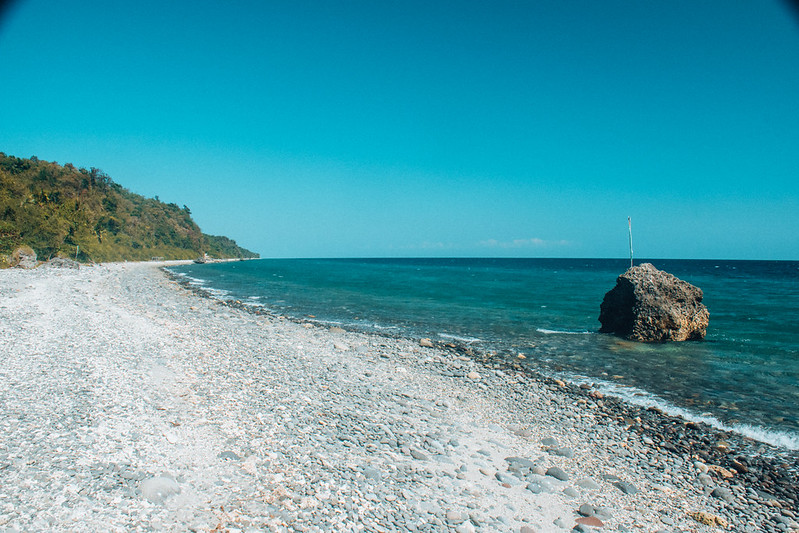 How to get to Malabrigo Pebble Beach

Ride a bus bound for Batangas and alight at Diversion or Balagtas. Transfer to a jeepney en route to SM Batangas and get off at the jeepney terminal to Lobo. Ride a jeep en route to Lobo and then once in Lobo, ride a tricycle to Malabrigo Pebble Beach.

At first I thought there is only one pebble beach in Luna, La Union, until I went there recently and found out that it is basically like that of Mabua where most of the beaches on its coast is hemmed in by stones.   While there is a beach resort called Pebble beach in Luna, and there is a pebble beach right next to Luna’s Watchtower Ruins, they are quite disappointing as they have lesser stones now, looks like most of the pebbles here have been taken.  For example, old photos of Luna’s Watch tower ruins shows a wealth of palm-sized pebbles dappled along the beach.  If the local government will continue to allow locals to gather the pebbles for selling or let the tourists to take them as souvenirs, I won’t be surprised if years from now all the pebbles here will be gone.  I hope they realize that it takes years, perhaps even millions of years,  for a pebble beach to be formed naturally.  So if you are visiting Luna, the best Pebble Beach is situated nearby Balay na Bato, a popular tourist attraction in this town.  But it looks like even this beach will suffer the same fate like those of other beaches in Luna, because during our recent visit, I saw a couple of sacks on the shore filled with pebbles that are ready to be transported. 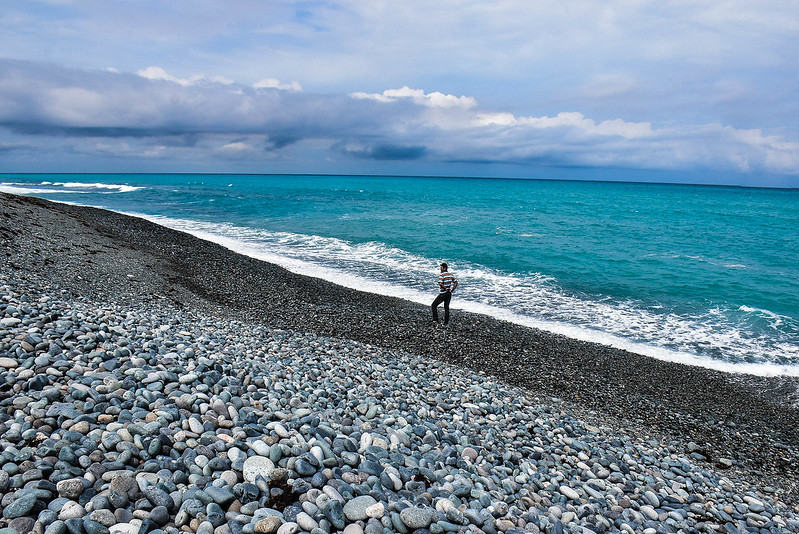 How to get to Luna Pebble Beach

ALSO READ:  LA UNION TOURIST SPOTS AND HOW TO GET THERE 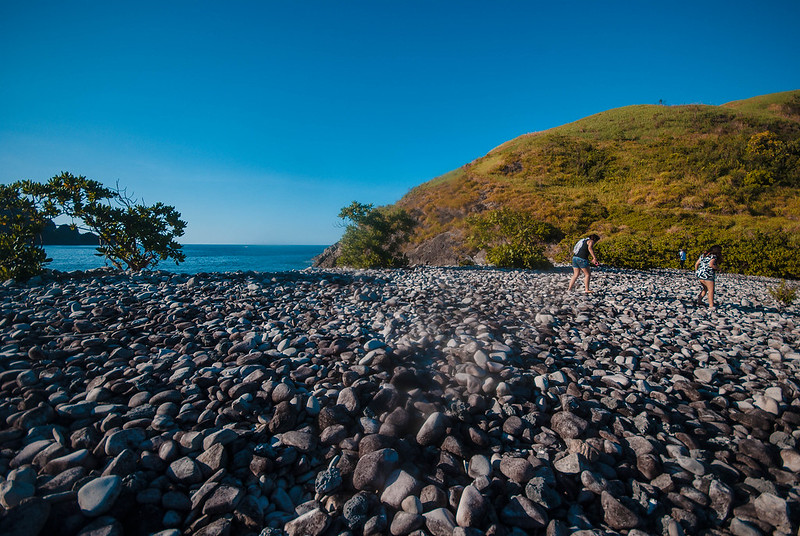 Beside Lantangan Beach is a wind-swept hill also part of Pitogo Island.  You can trek up here for a gorgeous view of the twin coves below.

How to get to Lantangan Beach

Lantangan is part of the islands in Caramoan Peninsula.  Ask your travel agency or boatman if Pitogo Beach and Lantangan beach is included in your Caramoan Island Hopping. 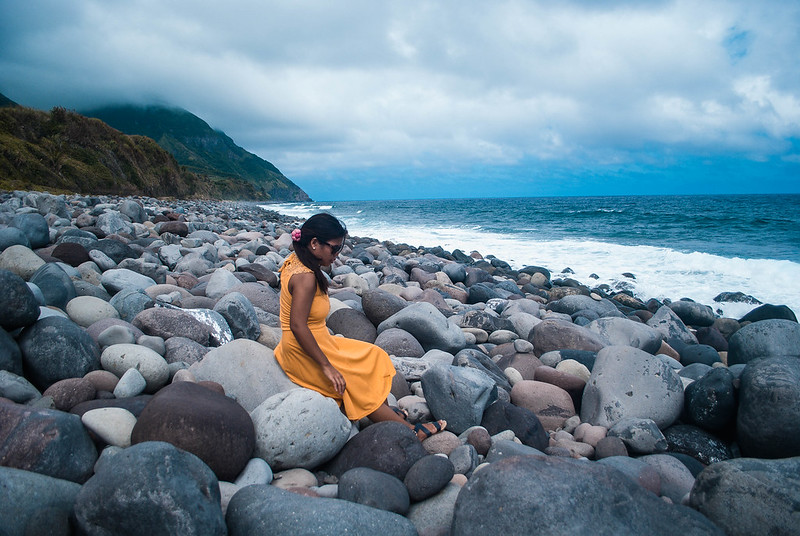 Although not exactly studded with small to medium pebbles, the Valugan Boulder Beach and Chadpidan Boulder Beach both located in Basco are fringed by gigantic boulders instead. When the nearby Mt. Iraya in Batanes flared up in 400 A.D, it spewed out rocks reshaping some parts of the coasts of Batan Island.  Overtime, the rocks had been polished by ceaseless waves. Today, both Valugan Beach and Chadpidan Beach are popular tourist destinations that are part of the usual tourist circuit in Basco.

Bagolatao Beach is another pebble beach found in the province of Camarines Sur.   It’s just 45 minutes away from Naga, a perfect respite from the hustle and bustle of the city.  There’s a resort in the area that you can rent for PHP 3,500 / USD 70, good for 20 people.  But if you just plan to do this a day trip, there are open cottages for rent for PHP 500 / USD 10.

HOW TO GET TO BAGOLATAO BEACH

To get to Bagolatao Beach you can rent a jeepney from Naga City or hire a boat from Pasacao Port.  As jeep can be expensive if you are traveling alone, try to charter a tricycle or motorbike to take you to this shingle beach.

Both Romualdez Beach and Dimanok Beach are located in the uncharted town of Maconacon in Isabela.  Romualdez Beach is said to be formerly owned by Romualdez Family who had a mansion by the sea here a couple of years ago before they abandoned the place sometime in the 80’s.  At the far end of the pebble beach is a popular rock formation dubbed as German Nose by the locals. Meanwhile, Dimanok Beach, which is more like a shingle beach, is crowned by a soaring rock formation. 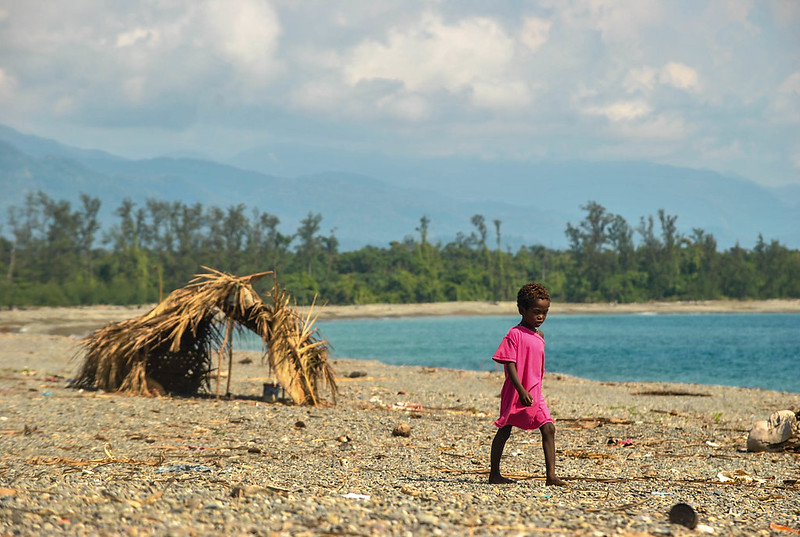 During our visit in Divilacan, Isabela, we chanced upon a modest public shingle beach in town, home to the indigenous people of Isabela – the Dumagats.