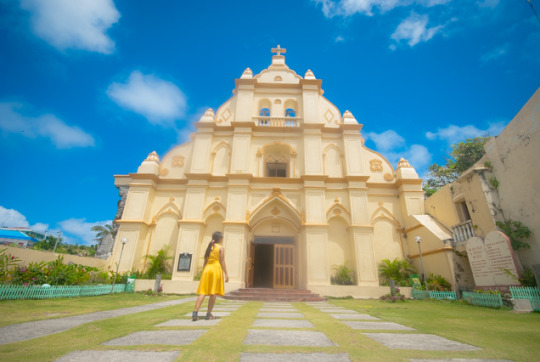 Stone houses, lighthouses and churches in pleasing harmony with the emerald green wind-rippled hills on which they stand greets me as our motorbike snakes through the serpentine road. Its ruggedly enchanting topography and the serene atmosphere makes Batanes seems such a friendly place. No wonder, it is flocked by tourists during the Lenten season.

The signature rolling hills of Batanes

Growing up in a devout family and a province where the Holy Week is deeply venerated, I got used to processions largely influenced by Hispanic beliefs and superstitions associated with this religious occasion.  So observing the Lenten season in another place such as Batanes is pretty much a new experience to me.

I expected to hear the radio broadcast religious programming as locals do the Stations of the Cross, or procession around the island with lavishly decorated carrozas (carriages) of saints. I prepared to embrace the no-noise-making rule and somber mood everywhere.

“We have no live crucifixion and locals don’t practice self-flagellation here”, reveals Philip Cardona, my local guide.  Pointing to a group of teenagers sauntering, he adds, “But locals especially the younger generation practice the Via Crucis.” During Good
Friday, instead of praying while visiting life-sized tableaux depicting the Stations of the Cross – which are usually erected on cliffs and hillsides – pilgrims walk, bike or drive around Batan Island as a form of sacrifice and devotion. At 3:00 P.M., they go to the church to attend the mass.

A good way to adapt to the solemn mood of the Lenten season in Batanes and see how the Ivatans – the indigenous people of Batanes – observe this sacred week, is to do the Visita Iglesia, otherwise known as “church visit”, a practice where pilgrims pay a visit to seven or more churches to pray and meditate on the Way of the Cross.  In Batan, one can start the Visita Iglesia by visiting the Immaculate Concepcion Cathedral in Basco, the first Catholic Church in the province. Then, there is the Tukon Chapel built by the prominent Abad Family. This small architectural wonder is inspired by the traditional Ivatan stone house.

Another structure worth visiting is the San Carlos Borromeo Church in Mahatao, which was constructed sometime in 1787. This lovely white church sitting on a beautifully-manicured garden is a National Cultural Treasure. It is one of the 26 Spanish Colonial era churches under the conservation program of the National Commission for Culture and Arts.

The postcard-worthy church of San Jose de Obrero fronting the port in Ivana also beckons tourists. This fortress-looking church boasts of an age-old foundation with a breath-snatching view of the nearby Sabtang Island.

Don’t leave without visiting the San Lorenzo Ruiz Chapel in Imnajbu, considered as the “Birthplace of Christianity in Batanes” as this is where the first mass in the province was celebrated.

On our way to San Antonio de Florencio Church in Uyugan, I see some kids striking an instrument made of bamboo which somehow creates a rhythmic sound as they go around the village. “We call it padakupak,” explains Ryan Cardona, owner of Bisumi Tours and Services, a local tour agency based in Basco town. Because ringing the bell is prohibited while Christ is dead, this is what children do instead.

Birthplace of Christianity in Batanes

Easter Sunday is family bonding time; people flock to the beach to picnic.  I hear stereos blaring music as both children and adults frolic in the water.  For most men, it is a good excuse for another drinking session, to celebrate the rising of the Lord, as if summoning a new life.