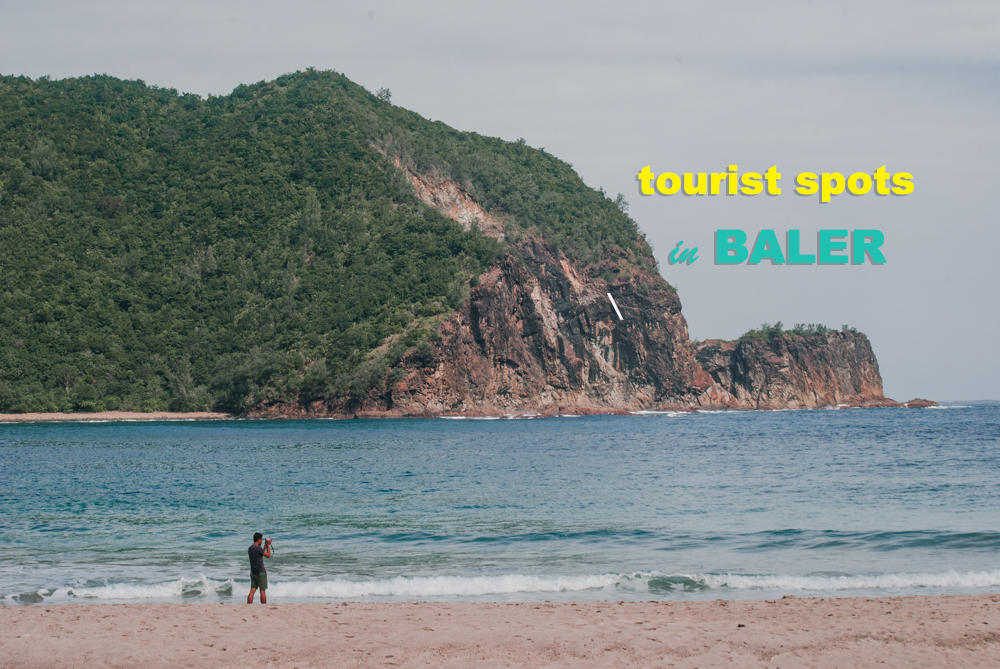 Located Northeast of Manila, through a long and majestic mountain pass accessible by bus or a private vehicle is the province of Aurora. The Municipality of Baler, the capital province of Aurora, is the most popular tourist destination here, home to spectacular rock formations, rich cultural heritage, sumptuous food and of course, one of the best surf spots the country has to offer. Here’s a list of the top Baler tourist spots for first-timers.

HOW TO GET TO BALER, AURORA

Traveling to Baler is quite easy. One can ride the Genesis air-conditioned bus located at Cubao Bus Terminal. Daily trips are available (5 to 6 trips per day), having an hour interval in-between trips. Travel time is  approximately 5 to 6 hours from Manila priced at PHP 500 to PHP 600 per person.

You can also travel via Joy Bus’ executive coach (also owned by Genesis). Passengers are pampered 1st class with soft blankets and pillows, with snacks served by their own bus stewardess. Fare is at PHP 700 to PHP 800 per person.

Or you can go road tripping via NLEX and SCTEX making an exit at La Paz, Cabanatuan straight to Baler, Aurora.

HOW TO TOUR BALER

If you don’t have a private car or vehicle, you can get around in Baler using the following:

By tricycle : Standard rate for destinations within the town center is about PHP 10.  But if you want to tour Baler and Aurora, you can rent a tricycle for PHP 800, good for 3 pax. Half day tour is PHP 400.

By motorcycle: PHP 800 per day

By bicycle: Mountain bike rental is PHP 300 per day or PHP 35 per hour 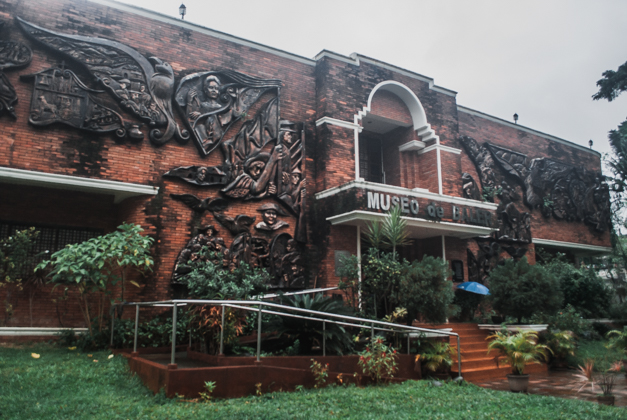 Baler Museum (Museo de Baler) houses local and Spanish artifacts that commemorates ties between the Philippines and Spain, relieving the Siege of Baler. It was named after Former President Manuel Luis Quezon, a native son of Baler who served as the father of the Commonwealth from 1935 to 1944.

How to go to Baler Museum: Take a tricycle in downtown Baler, fare is roughly PHP 10 per person 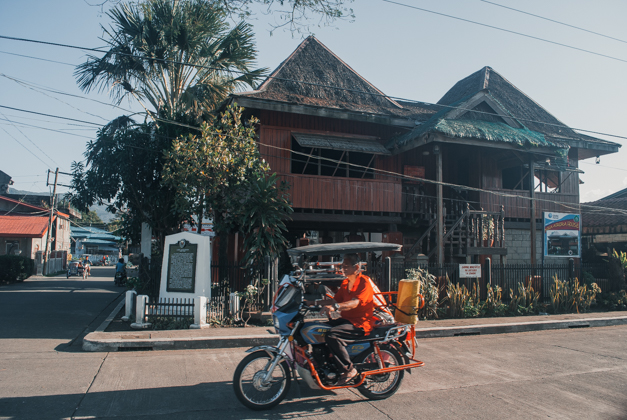 Baler is the capital of Aurora, a province named after the wife of the former Philippine President Manuel Quezon – Aurora Aragon-Quezon. Today, one can visit her ancestral house in Poblacion, Baler, which is open to the public with a minimal admission fee. It is walking distance to Baler Museum and is right in front of Baler Church.

How to go to Quezon House: Ride a tricycle in Baler and ask the driver to take you to Aurora Quezon House, it is also walking distance to Baler Museum.  Fare is around PHP 10 per person. 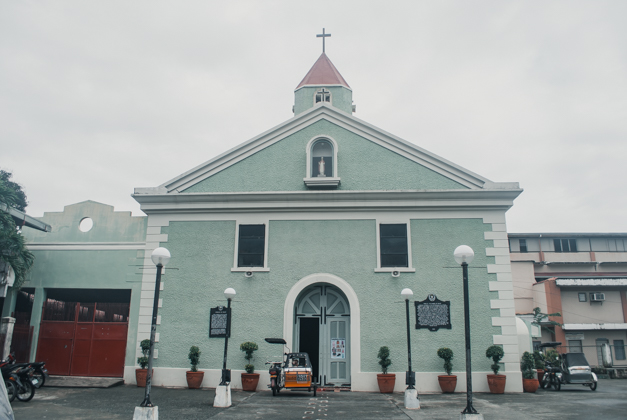 This unassuming church in Baler, known as San Luis Obispo de Tolosa Parish, is a surviving proof of the courage and resiliency of  the Baler residents.  This historic church, dubbed as the “Last Spanish Garrison”, was the location of the Siege of Baler wherein 54 Spanish soldiers refused to concede to the Americans even if the battle is already over. The Spaniards retreated in Baler Church for almost a year before they surrendered in 1899 because of illness and famine. This church was actually moved to its current location sometime in 1939 retaining some of its original parts. Don’t miss the 17th century Campana de Baler housed in the church’s bell tower. 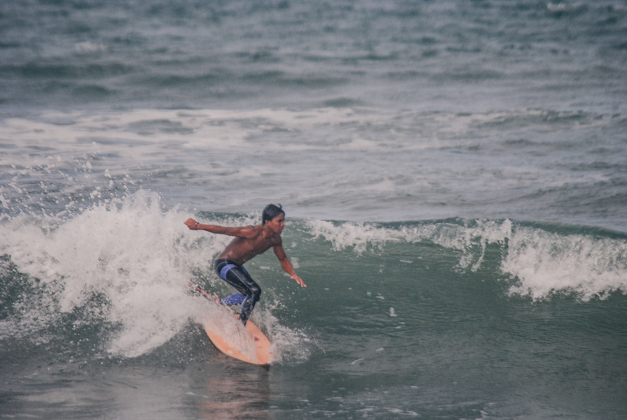 Your Baler escape will not be complete without grabbing a surfboard and riding the famous waves of Sabang Beach. For PHP 350 an hour, an instructor will teach you the ropes of surfing. Don’t be afraid to be wiped-out a couple of times. As the cliche’ goes, “No pain, no gain.” So, what are you waiting for? Surf’s up! 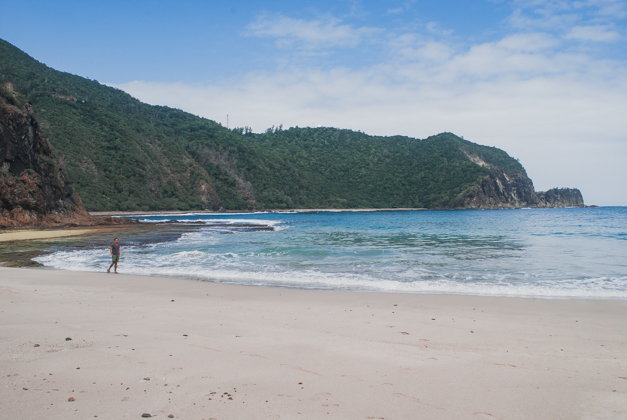 A secluded and privately owned paradise that offers a breathtaking view of the ocean that what makes Baler famous for. But before that, you must conquer your fear of heights and go up a 170-step uphill climb. Once there, enjoy the calmness of the moment and become one with the whisper of the sea breeze and the sound of the waves.

How to go to Dicasalarin Cove: Take a tricycle to Dicasalarin Cove. This isn’t part of the standard Baler tricycle tour but it can be done together with Ampere Beach. But take note that since this is a private cove, you need to register first at Costa Pacifica. Roundtrip fare is PHP 300, good for 2 persons. If you are a guest of Costa Pacifica, only PHP 100. Then transfer and ride another motorcycle once you are inside the premise. Your tricycle will wait for you at the gate. You may also go there by renting. Privat van for PHP 3,000, this is good if you are a large group. Inquire at the resort for assistance. 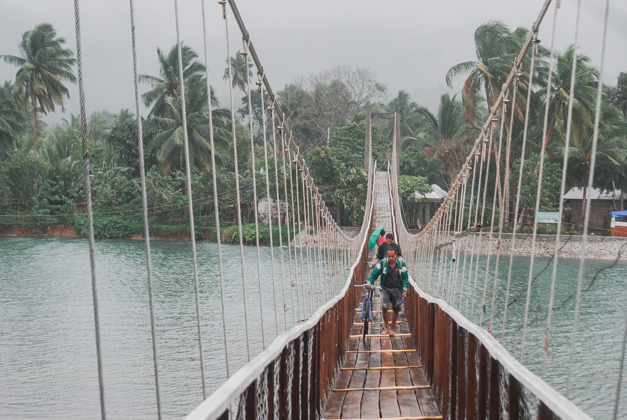 This popular bridge that connects Brgy.Tibang to Brgy.Sabang in Zabali Road has beckoned tourists visiting Baler because of its scenic view. Thus, it is now part of the standard Baler tricycle tour.

Upon arriving in Ermita Hill, you will most likely notice a statue of people holding hands. This was built to commemorates the deadly tsunami that hit Baler, wiping out the town. The only survivors were the residents who climbed Ermita Hill. Now, this historic area is a popular viewing deck, offering a panoramic view of Aurora towns such as Casiguran Bay, Sabang Beach, Pacific Ocean, Dimadimalangat Islets, and even the Pacific Ocean.

How to get there: You can ride a tricycle to Ermita Hill. This is part of the Baler tricycle tour. 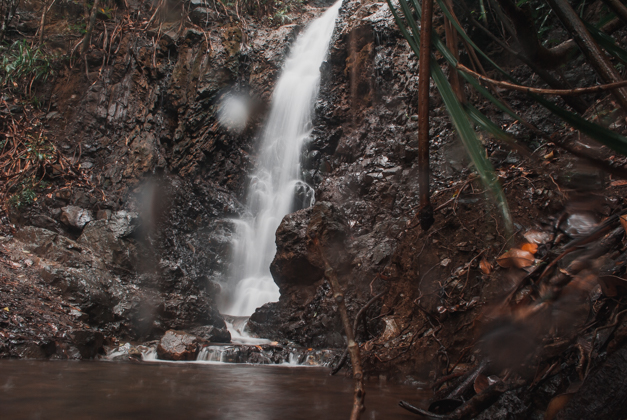 This is part of the Baler standard tricycle tour. This small falls is nearby the popular Diguisit Rock Formation.

How to get there: Ride a tricycle to Diguisit Falls.  This is part of the Baler tricycle tour. 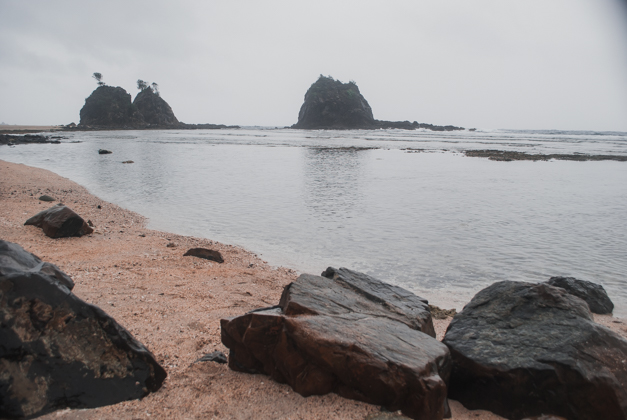 About a 30-minute ride from the town proper brings you to the picturesque rock formations of Diguisit Beach. It’s the perfect spot for photo enthusiasts especially during sunset. So, get your cameras ready and smile away!

How to get there: Ride a tricycle to Ditumabo Falls.  This is part of the Baler tricycle tour. 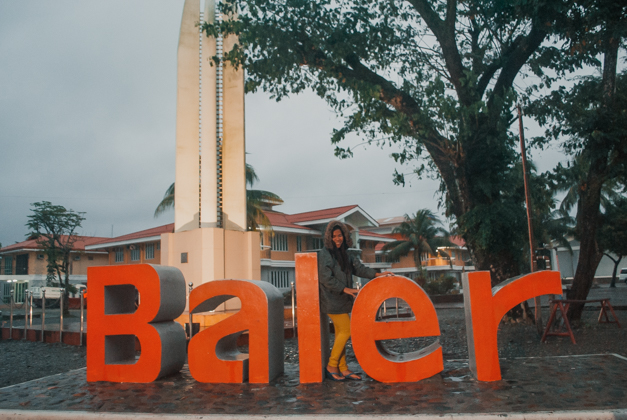 Tourists flock to Baler Town Plaza to have a souvenir photo with the massive “Baler” sign.

All of these activities will definitely make anyone hungry. Explore their local food served by various beachfront restaurants and hole-in-the-wall eateries from meat to fresh seafood, to fruits and vegetables. A must-try is their Paco, a fern-like leaf that goes perfect with grilled meat and salted egg. 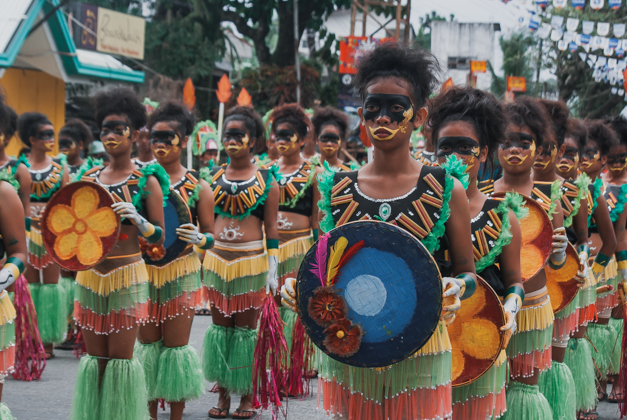 If you’re lucky enough, you can catch one of Baler’s festival.  The town usually celebrates music festival during summer – April to May. You may also catch the foundation day of Aurora every February 19, which happens to be the birthday of Aurora Quezon.

While you are in Baler, make time to visit some of the key tourist spots in Aurora. Here are some of the popular attractions in this massive province. 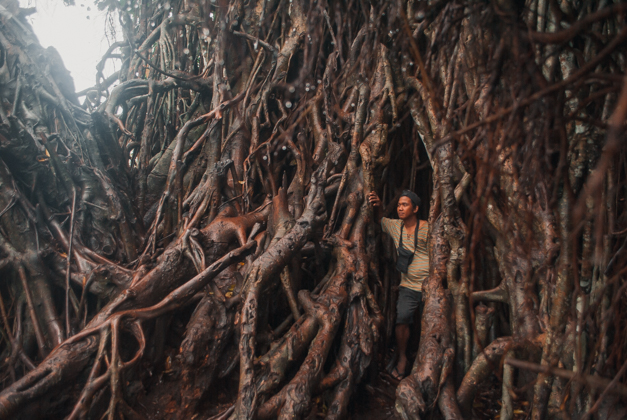 A Balete tree know to have been around for 600 years is a definite crowd drawer. Trees as such are known by many as superstitious in origin so one needs to gather enough courage to climb or walk through its humungous roots.

Entrance Fee: PHP 15 per person, if you want to go inside the tree, additional PHP 10

How to get there: Take a tricycle to Balete Park. This is part of Baler tricycle tour. 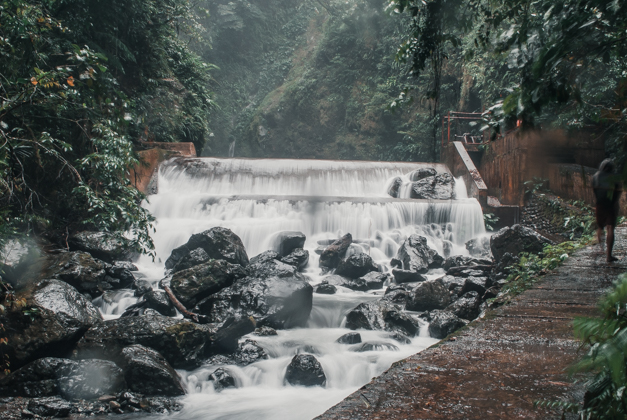 Traverse the rocky path and cross small wooden makeshift bridges until you reach the breathtaking Mother Falls or Ditumabo Falls. Take a dip in its cold icy waters, a refreshing reward for that 30-minute uphill trek.

If you have a private vehicle, you can go until the end of the trail.  Otherwise, you can hike or rent a tricycle for PHP 200 (roundtrip).

How to get there: Ride a tricycle to Ditumabo Falls.  This is part of the Baler tricycle tour. 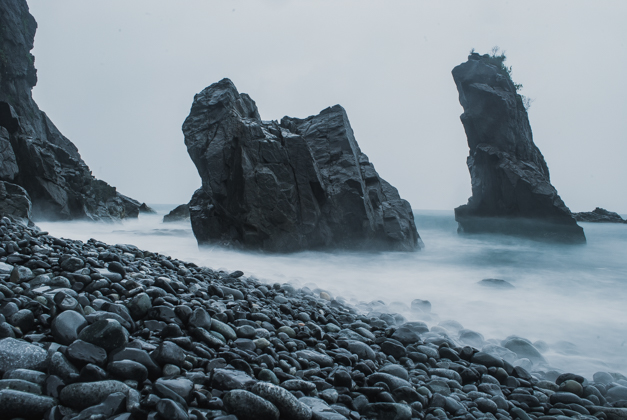 Popular beach to photographers because of its rock-hemmed coast. The beach itself is ordinary, not swimmable.

How to get there: Ride a tricycle to Ditumabo Falls. This is not part of the standard Baler tricycle tour but you can also do this as a tricycle day tour together with Dicasalarin Cove.

Where to Stay in Baler 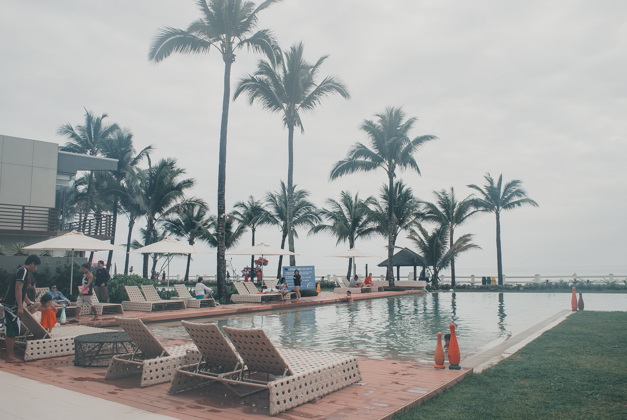 There’s plenty of accommodations in Baler for all types of budget.  Best to book ahead in advance as resorts in Baler can get fully-booked during weekends and holidays. Here are some of the top Baler resorts. 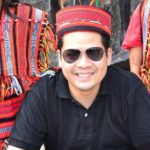 About the Blogger: Lester John Gojar is a bank manager, traveler and a contributor at www.happyphilippines.org.