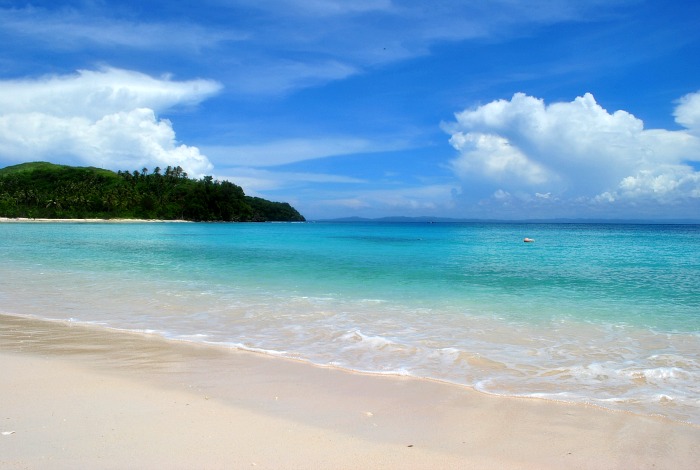 Matnog is the southernmost town of Sorsogon province in the Bicol region. Known as “ The Gateway to Visayas”, it houses a bustling seaport for vehicles and passengers boarding the RoRo (roll on/roll off) to and fro Allen, Samar.

The paradisiacal tropical islands here are the kind of escape you dream of – dazzling azure waters, powdery white sand beaches and coastline dappled with coconut trees and jungles.  Marvel at the splendid scenery while beach hopping in Calintaan Island.

Despite its proximity to mainland Matnog, it was only exposed to the public lately.  This bliss can even be viewed while aboard the ferry to Samar.

Tikling Island has pinkish powdery sand; it is devoid of luxury resorts and even nipa cottages.  The wild shrubs and vines on the ground add up to its raw appeal. The coast is long enough for leisurely walk and the beach is a seductive blend of emerald and turquoise waters. The only inhabitants here are the caretakers that thrive on fishing and copra production.

Like the picturesque beaches of Subic in Zambales, Subic Beach of Matnog is not only camera-friendly but it is as gorgeous as it appears in photos.  Its pristine shoreline is dappled with trees and boats.  There are also open cottages for rent and a tree house.

So if you plan to camp or stay overnight in Matnog, make it in Subic Beach.  You will not be disappointed basking in its impossibly aquamarine coast bounded by hills clad in dense bush land.

Do not leave without dropping by Juag Fish Sanctuary, where you’ll get to swim with vibrant aquatic animals.  There is no entrance fee but donations are highly encouraged for the upkeep of the marine sanctuary.

Juag is a wide expanse of shallow seawater that is home to diverse species of fish, sea cucumbers, and crustaceans.   The area is reserved for the reproduction of fish populations which are collected for studies and breeding and released in the wild once they reached their full egg spawning potential.

How to get Matnog:

There are flights to Legazpi City from Manila. From there, buses bound to Sorsogon city abound. Then you can look for Matnog-bound jeepney at Sorsogon City. From the town center of Matnog, head to the port and hire a boat for island hopping.

Alternatively, at Legazpi city, you may also take a bus bound to Bulan, and ask the driver to drop you off at “Trece” , the boundary of Matnog and Bulan. And from there wait for a jeepney to Matnog.

You may also take a bus en route to Matnog from Manila at the terminal of buses bound to Bicol in Cubao, Pasay and Alabang.