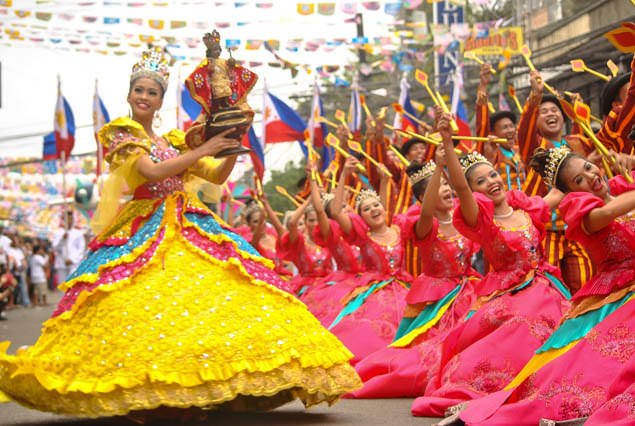 Visayas will soon be filled again with riots of colors and revelries as we celebrate the country’s grandest festivals this month. For many tourists, attending a festival is one of the most cherished travel experiences, as one gets to immerse in the culture of the place that is celebrating the festivity. 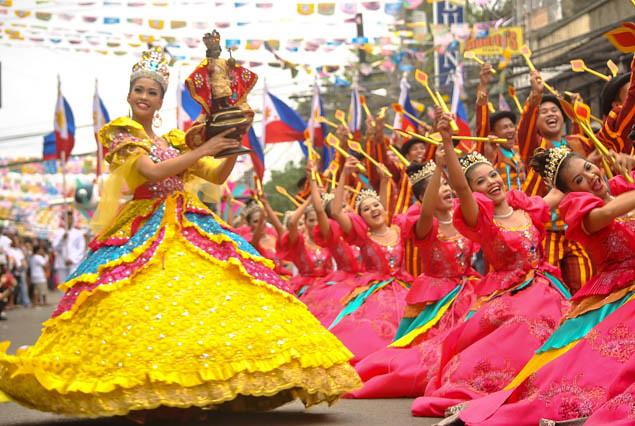 Here’s a look at some of the grandest festivals this January and how to survive them. Let’s join the revelry, but let us not forget the real reason why they are celebrated in the first place.

Sinulog in Cebu City has grown into one of the country’s grandest festival, attracting the biggest crowd each year. In 1521, Portuguese explorer Ferdinand Magellan landed in Cebu to plant the cross on its shore.  He introduced Christianity and presented the image of the Sto. Niño (Child Jesus) as a gift to Hara Amihan, wife of Cebu’s Rajah Humabon who was later named Queen Juana. She was reportedly ecstatic and started dancing while carrying the image in her arms. Other locals started following her in revelry. Historians argue that the Sinulog dance ritual, which resembles the current of the river (sulog), was already perfomed by the natives in honor of their wooden idols and anitos even prior to the arrival of the Spaniards. Today, Sinulog is celebrated in honor of the Sto. Niño. 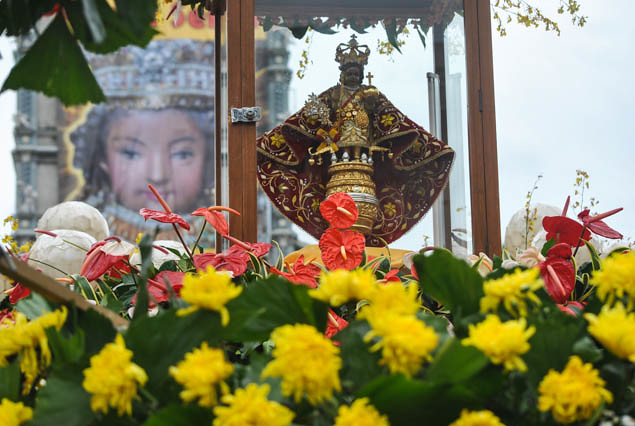 Iloilo’s biggest fest originated in 1967 when an image of the child Jesus brought to Iloilo from the neighboring province of Cebu was welcomed warmly by the Ilonggos. Two years after, the religious celebration added the iconic Ati-Atihan contest as part of the cultural aspect of the festival. Story has it that since then, Dinagyang developed into a bigger and more pompous revelry. But it was only in 1976 that Dinagyang encouraged with the street revelry for the audience. Today, Dinagyang is undoubtedly, one of the much awaited festivities in the country that beckons hordes of tourists.

Dinagyang celebration culminates in January 9 at 3:00 P.M, with an Opening Salvo along the street parade route – Iloilo Provincial Capitol to Freedom Grandstand. But the highlight of the festival the Dinagyang Ati Tribe Competition will be held in January 25 at 8:00 A.M.  It is highly recommended to attend the religious fluvial and the solemn foot procession of the image of Sto. Niño de Cebu in January 23.  And the day after, make time for the Kasadyahan Regional Festival. 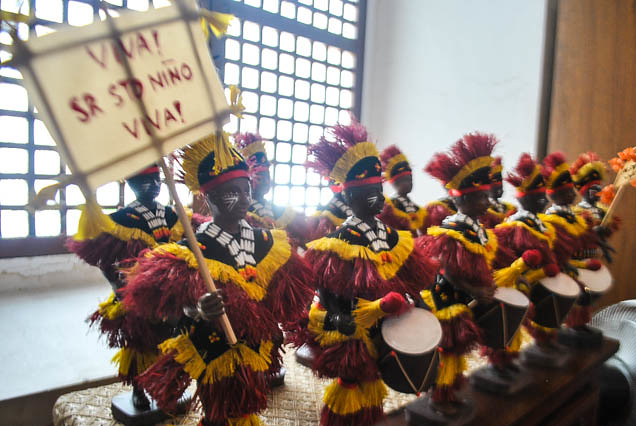 Tracing its root back to the 13th century, Ati-Atihan in Kalibo is said to be the oldest festival in the Philippines. There are many stories as to how this festival came to be, but the most well-known is based on the Legend of Maragtas. According to the story, 10 Bornean Datus (chieftains), together with their families, fled the repressive reign of Sultan Makatanaw. In 1212 AD, their ships arrived in Panay. Datu Puti convinced the tribal chieftain Marikudu, the ruler of the Atis – the indigenous people of Panay, to barter land in exchange for gold and jewelries and the golden salakot (wide-brimmed hat). A feast was held, and the Maraynons (the Bornean immigrants) smeared their faces with soot and danced with the Atis to the beat of the drums as a symbol of unity. This story is re-enacted during the Ati-Atihan Festival. But during the Spanish colonial period, the revelry was moved during the celebration of the feast of the Sto. Niño.  The weeklong Ati-Atihan in Kalibo is scheduled in January 9 to 18 this year. 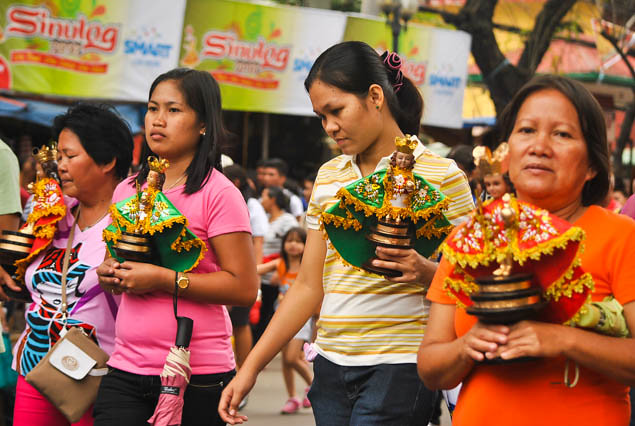 Kabankalan City’s prime festival “Sinulog sa Kabankalan” which started in 1976 is another weeklong festival celebrated from January 9 to 18. The highlights of the festival like the fluvial procession of the Sto. Niño, the Grand Tribal Competition and the Sinulog Music Festival will be held in January 18.

The unassuming town of Ibajay in Aklan celebrates their own version of Ati-Atihan. Spectators say it’s less commercialized and more authentic than the bigger festivals. Interestingly, locals carry food tied on sticks such as grilled chicken, fish, prawns and crabs while shouting “Viva! Senor Sto. Niño!” during the revelry. The festival is held every 4th Sunday of January. 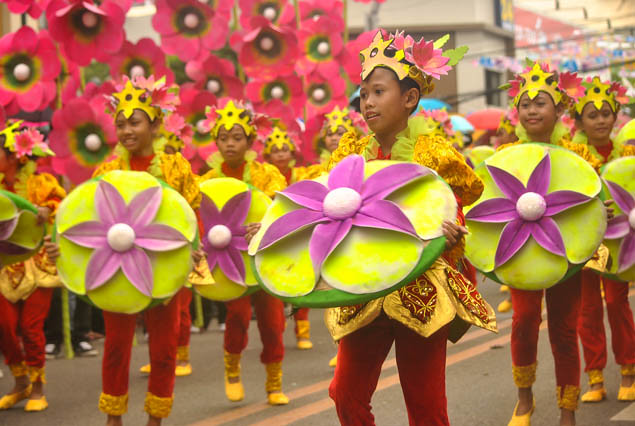 Know in advance the route of the street parade, and strategically position yourself in the most happening of places.

Wear comfortable shoes, sandals, hats and clothes. Avoid dark colored shirts and opt for white or light-colored neutrals as they absorb less heat. Bring extra clothes in case you need to change. Avoid wearing too much accessories or jewelries.

Find a place to cool down from the heat and the crowd.

Settle for the local standards and be ready to endure the heat and crowd.  Bear in mind that it will be crowded, so be patient when going through the crowd and standing in line with hordes of people. 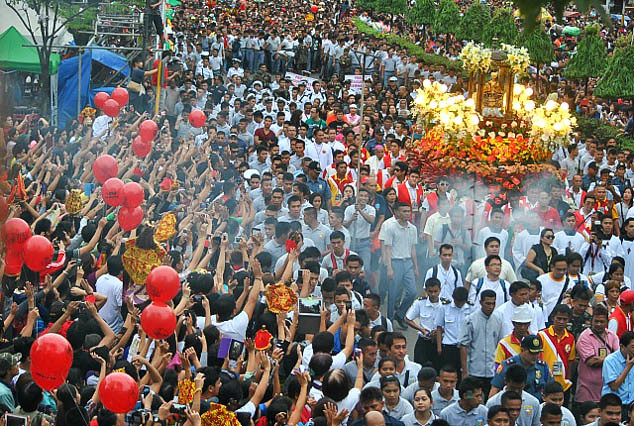 Keep mobile phones, gadgets and valuables in one bag and do not let it out of your sight until you get home. Wearing a belt wallet will also be helpful to secure your money. Pack light; do not bring unnecessary things or gadgets.

Eat plenty before the fest to keep your energy up, and bring water or drinks to keep you hydrated. Stack up chips, energy bars cookies and nuts in your bag in case you get hungry while watching the parade.

Stack up cash, and bring small notes with you as this will be helpful when buying drinks and snacks. ATMs will most likely have long lines. 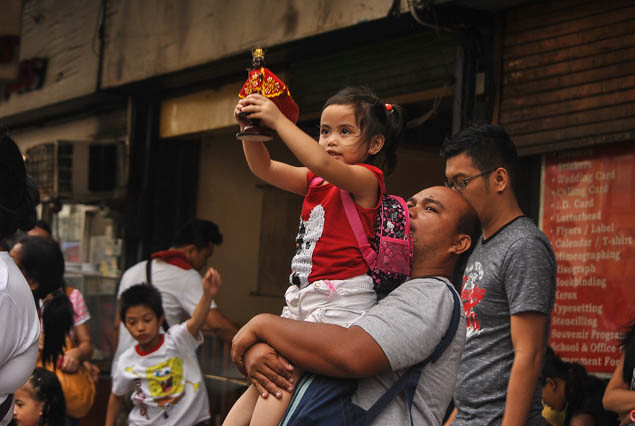 Be mindful when taking photos of the costumed participants as they are part of the competition, make sure you are not interrupting the flow of the procession. Also be respectful of other people, many photographers jockeying for a prime spot to get the perfect shots seem to forget that there are other spectators behind them.

And lastly, have fun! Embrace the festival spirit!