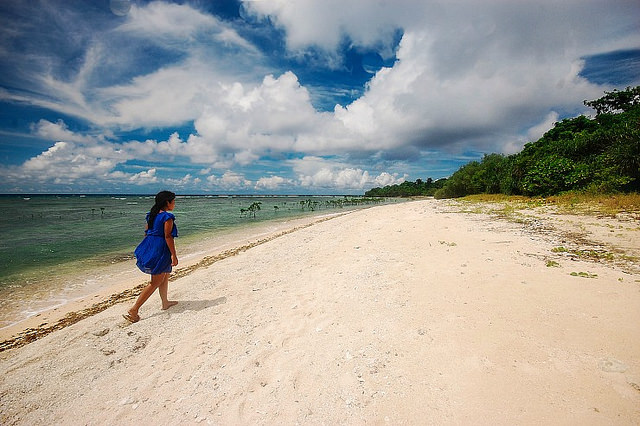 Just two hours away from the hustle and bustle of Iloilo City, the unassuming town of Anini-y offers a much-needed respite to weary travelers.  Rugged and bountiful, this 4th class municipality in Antique Province is home to some tourist attractions worth a visit. 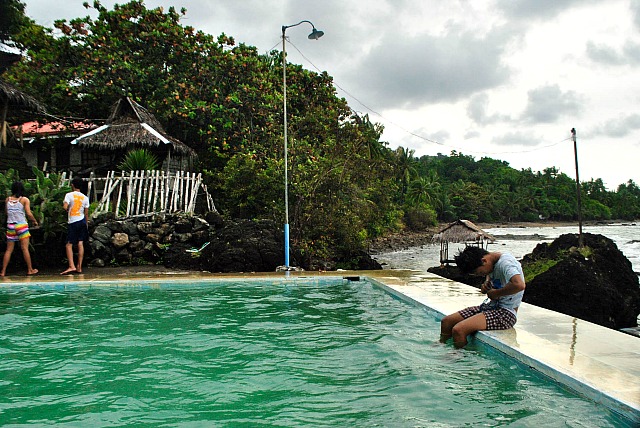 Siraan Hot Spring is a local favorite. Here, one can take a refreshing dip at any of the hot springs enclosed in bathtubs and pools. A mossy swimming pool with sulfuric water is the key feature of Siraan. The water flowing here is believed to be therapeutic; it is said to cure skin diseases like fungal infections and eczema as well as soothe muscle and body aches. Climb up the gigantic boulders for a scenic view of the endless sea. Don’t miss the small dormant volcano, now crowned by a grotto, situated beside an abandoned PHIVOLCS station within the confines of the resort. It is said to be Antique’s smallest volcano, part of the West Philippine Fault. 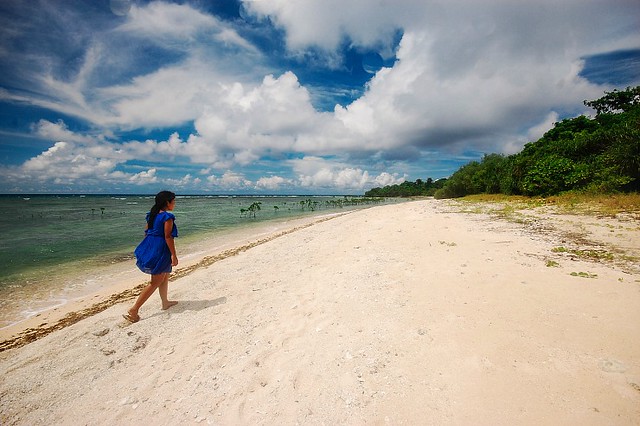 (a balmy day at Nogas Island)

From Siraan Hot Spring, the neighboring Nogas Island is noticeable. Legend has it that it was formed when the couple Nogas and Anini broke their promise to the fairy God mother. While traversing the rough sea, their outrigger boat was capsized by enraged waves – said to be beckoned by the furious fairy. Afterwards, a white sand island fringed by mangroves and lapped by cerulean water emerged from the same exact spot where they were last seen. 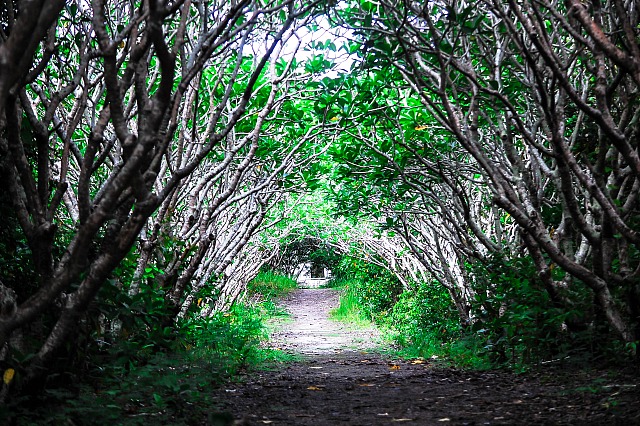 (the frangipani-lined trail to the lighthouse)

Another version of the story tells the forbidden love affair between Anini, a beautiful daughter of a Malayan chieftain in Hamtic, who fell in love with a former slave and farmer’s son – Nogas. Their love affair did not end up happily ever after because it was forbidden in the olden days. Nogas was killed and his body was thrown into the water where an island appeared, while Anini died of a broken heart and on her burial site emerged a hot spring and a small volcano.

It was late in the afternoon when we arrived in Anini-y, and by some stroke of luck, we witnessed residents helping out some local fishermen pull off their nets from the calm sea. They happily showed us their catch for the day, though not as much as they expected. 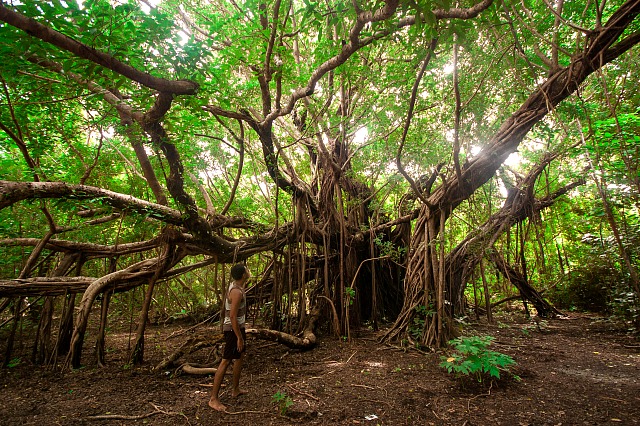 (an age-old tree dominates the wilderness)

The next day we visited the uninhabited and marine protected island. Its white sandy shore is hugged by sapphire water, while a trail leading to the lonely sentinel is flanked by lovely frangipanis. We strolled further into the wilderness and arrived at a mangrove forest occupying about 24 hectares of land dominated by a century old tree. Here, a variety of birds abound, though we were unable to take photos of them as they hid fast, we were contented that we’ve heard their twittering.

Aside from bird watching, diving and snorkeling are some of the activities you can do to enjoy a day in Nogas Island. “The coral plates are huge, and many rainbow-hued fishes thrive there!” exclaimed my friend after snorkeling.  About 73% of live coral is said to inhabit the area.  Indeed, nothing can encompass nature’s prowess and Nogas Island is one great proof of that.  But sadly, the place needs some clean up as trash are scattered on some areas. 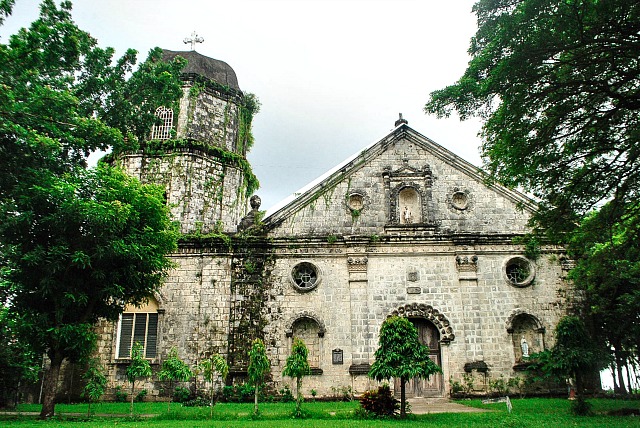 Before leaving this modest town, we dropped by at the only preserved old colonial church in Antique – the 19th century Anini-y Church. This age-old stunning revivalist structure is described by Panublion as incorporating traditional elements from Baroque like the triangular pediment, supported by a single story, divided into sections by engaged pilasters. Interestingly, the tree-story bell tower of the church is quadrilateral at the lowest floor but hexagonal on the upper floors. Anini-y Church was constructed out of carved coral stones and limestone blocks, and like most century-old churches in the country; they were glued using egg whites.

How to get to Anini-y, Antique:

Philippine Airlines has flights to Iloilo. At Molo Bus Terminal, take a bus bound for Anini-y or San Jose and just tell the driver you will get off at Anini-y.  Travel time is 2 hours. Fare is about Php 80. You may hire a boat for Php 500 (good for 3-4 pax) to Nogas Island at Siraan Hot Spring or at the beach near the island.  Snorkeling and diving equipments can be rented from nearby resorts. Pay the Php 20 per person entrance fee as well as the Php 20 environmental fee. Bring drinks and food as there is no store in the island. Tell the boatman what time you will be picked up. Nogas Island is good for a day trip, but if you wish to stay overnight, there are cheap sleeps in town. 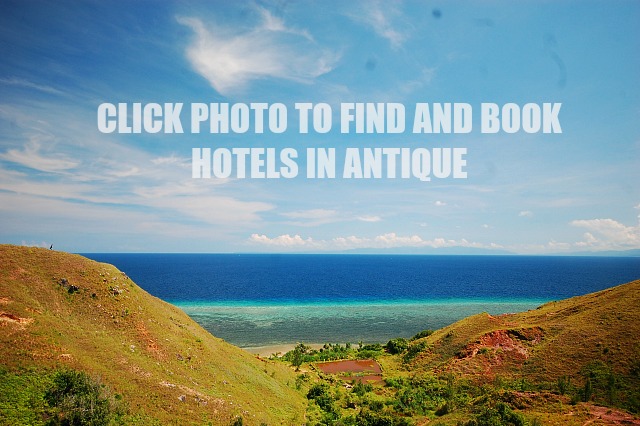