Located down south of the Philippines, Tawi-Tawi is a vibrant province that is slowly making its name in domestic tourism. Unfortunately, most tourists are scared to venture further down this region because of the negative news from the mainstream media.  Bongao in Tawi-Tawi is relatively safe and peaceful for local tourists. This province is endowed with serene white beaches, charming mosque, rich culture and good food that won’t cost you and arm and leg.

Start your day by having brewed coffee at one of the local coffee shops along the main road of  Bongao. Don’t be surprised if you are suddenly served with a tray full of local delicacies. Just eat what you want to pay and do not worry because the untouched food will not be billed to you. Also try their famous satti sold on eateries. Similar to the Malaysian satay, satti is a breakfast meal comprised of small strips of roasted chicken, liver or beef on stick served with puso (rice that is cooked inside a palm leaf pouch) and soaked in spicy-sweet sauce.

Just walking a distance from the main road at Bongao’s commercial center is the Chinese Pier. It was once a floating market in the olden days where the locals barter goods with the Chinese and Arabs. Now, a couple of large fishing vessels fringed the pier. If you are curious on how these vessels were created, head over to the ship building village of Pangasinan.

Standing on an elevated ground at the foot of Bud Bongao Mountain facing the town center is the stately Tawi-Tawi provincial Capitol with golden domes and Mughal-inspired minarets. Here, you can enjoy a panoramic view of the city. A visit to Tawi-Tawi will not be complete without trekking the scared peak of Bud Bongao which offers a breath taking view of the endless sea and the lowlands. Just make sure you get a guide and bring some bananas to feed the macaques residents of the peak.

Beaches also abound in Tawi-Tawi, the best I have seen in Bongao is the local’s holiday beach called Silisad Beach located at the back of Bud Bongao. It has beautiful rock formations by the shore, towering palm trees and a mixture of blue green waters. Some of the beach here especially the ones along the way to the airport are mostly occupied by the Samals were they built houses on stilts. The seafaring Bajaus on the other hand have settled at the lake in Sanga-Sanga where such types of dwellings also abound. There is also a Bajau village mostly visited by tourists to buy authentic Bajau banig (straw mat) as souvenirs. Here you can catch the Bajau women weave banig out of pandan leaves. 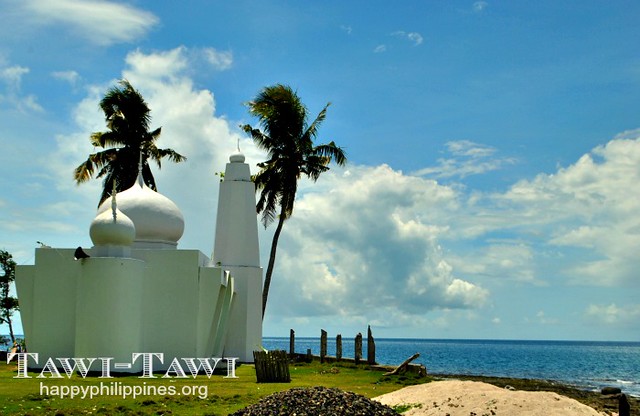 Another island worth visiting is Simunol Island, the birthplace of Islam in the Philippines, where Sheik Karimal Makdum Mosque, the oldest mosque in the country is located. From there you can also hire boats to take you to the fine beach of Panampangan Island.

How to get to Bud-Bongao in Tawi-Tawi?

Cebu Pacific and Air Phil Express flies directly to Bongao, Tawi-Tawi from Zamboanga city. From the Sanga Sanga airport, you can hire a tricycle for Php100 to take you to the town center.
For budget accommodation, head to Passengers Place or Becky’s Pension.
Rent a tricycle to tour you around town and to Bud Bongao.