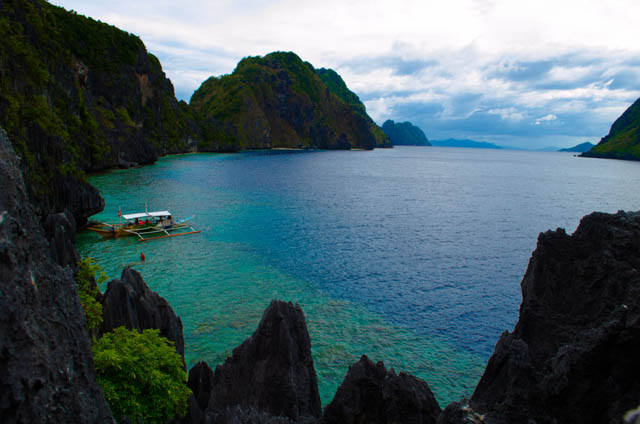 “How could someone abandon such a beautiful island?” I wondered as I climbed through the craggy limestone outcrops. The gloomy sky prevented us from seeing Matinloc in its full glory, but the view up the summit was still undeniably mesmeric. Karsts surround the beautiful blend of shamrock green and cobalt water. 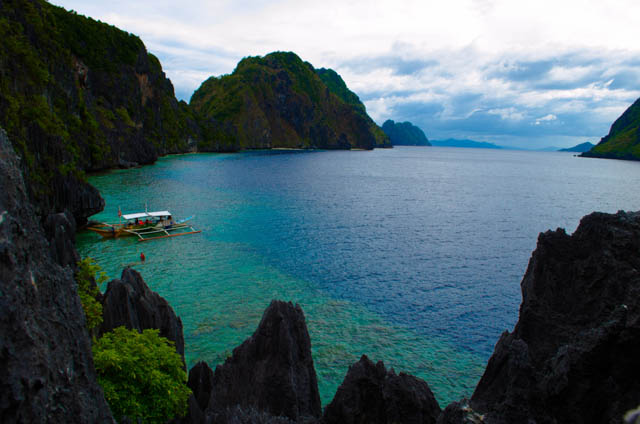 Matinloc is coined from the Cuyonin (one of El Nido’s local language) word ‘Matinlo’ which means ‘maganda’ (beautiful) in Filipino. It is part of El Nido’s Tour C package, one of the most sought-after tours here. As our boat docked, our guide Richard was quick to point out that there is an abandoned mansion with a shrine here, owned by a resident of El Nido who married a German.

“It was creepy inside!” Ram, a fellow tourists exclaimed. There are still furniture left inside, the rest where stolen piece by piece according to our  tour guide. The only ones left are those that are too large or too heavy to be carried by an outrigger boat. There is a small ‘museum’ with photos telling the history of the structures on the site. 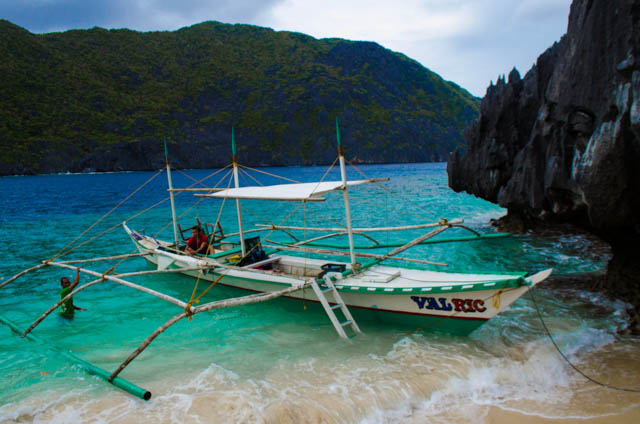 A tour boat docked at the wharf of Matinloc waits for tourist.

There are many stories as to why the owners abandoned the place. But one of the most controversial was shared to us by our young guide Ryan. Story has it that the owner dreamt of a dome-shaped structure with columns where the image of the Blessed Virgin Mary with a cross on a circular altar is enshrined; purportedly it is the ‘Shrine of the New Jerusalem’. “One day you will build it, your empire will be restored,” he was told in his dream.

So they started an aerial survey of Palawan and found a “heart-shaped” island in El Nido which happened to be Matinloc. Afterwards, they bought the island and started building their mansion and the shrine. There was no exact date provided as to when and why it was abandoned. Ryan said that one of the alleged reasons shared to them during his training as a tour guide was that the mansion and the shrine is suspected to be just a front, because based on anecdotes, Matinloc is blessed with treasures and oil underground. “Once the treasures were allegedly hoarded, the island has been abandoned”, Ryan shared. But if this version of the story is true, the question as to who might have gotten the treasures remained unanswered.

On the other hand, Minda Bermudo – who works for the Matinloc Island owners – explained that the shrine was built for religious reasons. “It was abandoned because the couple separated. The ownership of the land was granted to the wife – the El Nido resident. So the German husband just left the country,” she added. “The festival of the Blessed Virgin Mother is held every May 31st at Matinloc Shrine. And she visits the island from time to time.” 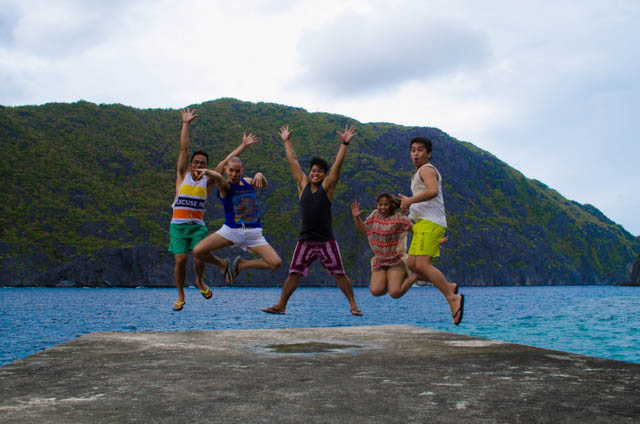 Matinloc’s scenic wharf is a popular spot for jump shots!

Whatever is/are the reason/s behind the desertion of the island, tourists nowadays are just glad that they could enjoy this jaw-dropping place for free – whether they want to hike up the karst outcrops to witness the scenic view of the surroundings or take jump shots. Undeniably, this mysterious heart-shaped island has caught the hearts of those who have seen it.

Philippine Airlines has daily flights to Puerto Princesa. Take a multi-cab or tricycle to San Jose Terminal and board a bus or van en route to El Nido. Travel time is 6 hours. Fare is Php 400-450.